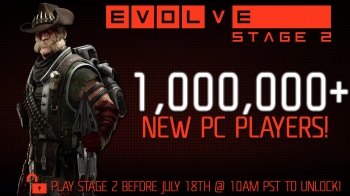 Evolve's numbers just keep going up and up.

Last week, Evolve went free-to-play. It instantly, predictably, had a surge in new players that many assumed would peter out before long. However, its player count just keeps going up and up, and there are now over a million people playing Evolve.

Evolve's official Twitter account boasted about the milestone, and to celebrate, is giving away Griffin's Blood Eagle Hunter skin for free to anyone who logs into the game between now and July 18 at 10 AM PT.

According to Steam charts, the game has peaked at 51,000 concurrent players, which is more than double the 25,000 we saw it hit last week.

The new version of Evolve, which has branded itself as Evolve: Stage Two, is currently completely free. Players earn Silver Keys by playing and can use them to unlock hunters, monsters, skins, and perk upgrades. There are no cash transactions in the game at this time, though that may change in the future, as the game currently only features four of the original game's maps.

Are you playing the new Evolve? Do you think Turtle Rock have taken the game in a better direction? Do you think this surge in players will last? Let us know in the comments.