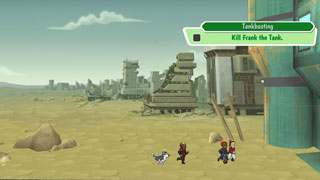 You can now play Bethesda's vault-building strategy game on your PC.

Bethesda released Fallout Shelter for mobile devices in July of last year, and the app earned over $5 million in two weeks. Since then, the company has added Dogmeat and other pets, a a crafting system, and more. If you wanted to build your own vault, but didn't want to do it on your phone, you can now get Fallout Shelter on PC.

All you need to do is download the Bethesda Launcher. Once you've done that, you can install the game.

The newest version not only adds PC support, it also adds an all-new quest system to the game. You can take control of your dwellers, head out to new locations, and form groups of dwellers to take on bigger challenges. You'll also get more control over your dwellers in the new combat system, which lets you direct attacks.

The download is free, so if you want to play Fallout Shelter, all you need is the launcher. You can get more info about the game at Bethesda.net.