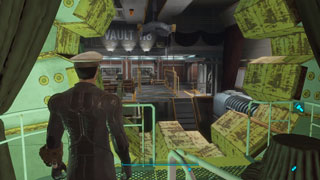 A Fallout: New Vegas modder pointed out similarities between his work and a Far Harbor, but Bethesda says it's just a coincidence.

If you're into Fallout: New Vegas mods, you may have played Autumn Leaves, created by modder BaronVonChateau. The mod adds a quest Based around solving a murder mystery in a vault. If that sounds familiar to you, it's because there's also a quest in Fallout 4's Far Harbor DLC named "Brain Dead," that has a similar theme.

BaronVonChateau (whose real name is Guillaume Veer) wrote about the similarities between the mod and the official quest in a post on ModDB. He particularly mentions the theme of the quest, as well as some of the plot points and story beats. It also includes a number of screenshot comparisons.

The two quests do seem fairly similar, but Bethesda VP of Marketing Pete Hines told GameSpot the similarities were coincidental. "We love our mod community and would never disrespect them. I checked, and any similarities between the two are a complete coincidence," Hines said.

While Veer posted about the similarities he saw, he didn't seem angry or upset. In fact, he said, "I seriously think this is perfectly okay. After all, Autumn Leaves' inspirations are countless ... and being influenced is a natural part of the writing process." But Veer also told GameSpot that he'd like to be acknowledged by Bethesda.

"Being acknowledged in the game's credits, for instance, would be a very nice--and costless--move towards us modders. Many of us are making mods, often taking years of our free time in order to get a job in the industry, and this kind of recognition would really gives us a tremendous boost."

While that's an understandable sentiment, it's unlikely to happen in light of Hines' statement. You can check out Autumn Leaves at ModDB, and you can find the "Brain Dead" quest in Far Harbor.