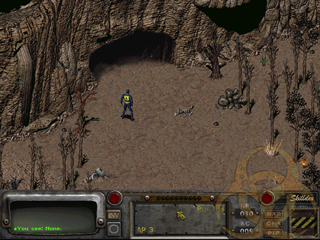 A new Fallout 2 mod bridges the gap between the first and second games.

Most of the Fallout news we see these days centers around the more recent releases, like Fallout 4. But if you're a fan of the older game sin the series, then this new mod is right up your alley.

Described by the developers as "a new, old-school Fallout," Fallout 1.5: Resurrection is a mod for Fallout 2. It bridges the gap between the events of Fallout 1 and Fallout 2. Your character wakes up in a cave with no memory of who he is, or how he got there. Naturally, you'll spend most of the game trying to figure that out.

The mod aims to embrace a darker feel, much like the original title in the series. The official site says that "Easter eggs and jokes, with which Fallout 2 was literally overfilled, have been folded into the background."

All you need to play it is a clean install of Fallout 2. Resurrection includes the latest patch for the game, as well as the High Resolution patch and Sfall, which means the mod should run on pretty much every version of Windows.

You can check out the mod in the trailer below, and if it's your sort of thing, you can head over to the official site and download it.