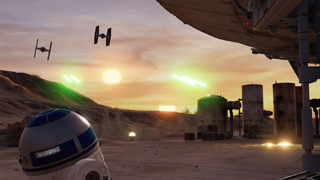 The first officially-sanctioned first-person VR lightsaber game is Trials on Tatooine, and it's free on HTC Vive.

Over the weekend, the Star Wars Celebration took place, and one of the games that was shown off there was Trials on Tatooine. Called a "Cinematic Virtual Reality Experiment," the game drops you onto Tatooine amidst an Imperial attack.

Luckily for you, R2D2 is there to hand you a lightsaber and point you at the assaulting Imperial troops. You'll fight wave after wave of enemies while the Millennium Falcon makes preparations to escape.

The game was developed by Lucasfilm and Industrial Light & Magic, and can be had free of charge on the HTC Vive after launching today.