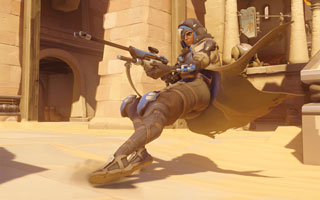 In addition to adding a new hero, Overwatch's PC patch makes changes to the game's other characters.

Last week, Blizzard announced Overwatch's newest hero, Ana. Ana is a support-class sniper, and Pharah's mother. And you can play as her on PC now.

"After being out of the fight for several years, one of Overwatch's founding members is returning. Introducing Ana-a battle-scarred veteran who supports her teammates from a distance using a unique and highly specialized collection of weapons," the description reads.

A rundown of her weapons and Ultimate:

"Ana's primary weapon is her Biotic Rifle, which fires long-range darts that can restore the health of her allies or deal ongoing damage to her enemies. Meanwhile, her Biotic Grenade is perfect for a close-quarters clash, simultaneously healing teammates and injuring foes caught in its small area of effect. (Affected allies will also receive a temporary increase to all incoming healing, while affected enemies can't be healed for a few moments.) And if the battle starts to get out of hand, Ana's sidearm can fire a Sleep Dart, knocking her adversaries unconscious. Plus, Ana's ultimate ability, Nano Boost, empowers one of her teammates, granting faster movement, increased damage, and resistance to enemy attacks."

Also included in the patch are a number of different hero balances, some of which are the result of self-healing abilities now charging ultimate abilities. Bastion, Soldier: 76, and Lucio's Ultimate cost has increased by 10%, while D.Va's has deceased by 15%. The best part - while the explosion delay from D.Va's ultimate has been reduced from 4 seconds to 3 seconds, it no longer damages the player who activates it (woohoo!). Meanwhile, Mercy's Ultimate charge cost has increased by 30%, but is balanced out by the fact that Mercy "will be a lot safer when activating the ability in the middle of combat."

For a full list of changes to the various heroes and bug fixes, you can read the patch notes here. According to Blizzard, the patch will hit PS4 and Xbox One soon.