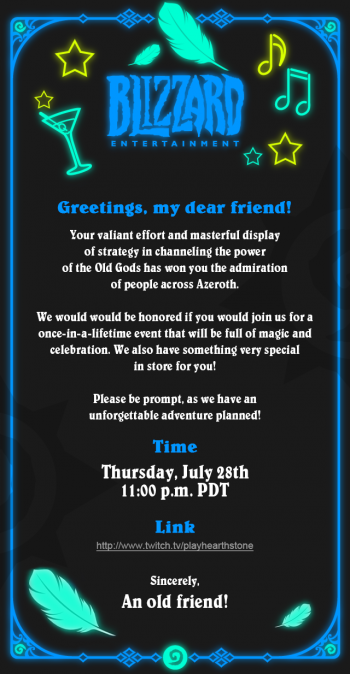 An invitation to a Hearthstone livestream bears a very distinct visual style.

It looks like we won't have to wait too much longer for the next Hearthstone expansion to be revealed. Blizzard has invited us to a Hearthstone livestream via the message you'll see to the right, which we can only assume will reveal the next "Adventure" expansion for the game. It will take place next Thursday, July 28 at 11:00 PM PDT over at Blizzard's official Twitch channel.

The most common fan theory at this stage is that this will be an adventure, not an expansion (as Whispers of The Old Gods was released as a full expansion earlier this year), and that it will take place in Karazhan. Why Karazhan? Well, the feathers on the invitation are a pretty dead giveaway (Medivh). Secondly, a golden invitation handed out to players at the Fireside Gathering event that took place at the University of California looks like something Karazhan's Moroes would write.

Lastly, both Medivh and the tower featured in the Warcraft movie, which would make for a nice crossover.

Either way, we'll find out for sure next Thursday.