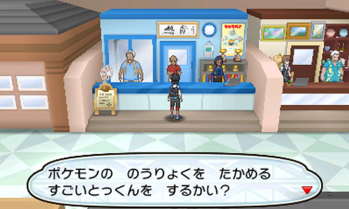 Got some good news for the hardest of hardcore Pokemon masters today. The upcoming Pokemon main series games: Pokemon Sun & Moon will feature a new way to train level 100 Pokemon. It's called "Hyper Training", and it may finally put an end to the endless Ditto breeding farms high-level players have to endure in search of perfect IVs.

The official Japanese Pokemon website revealed the new feature, but isn't super clear on how it works. It appears to be an enhanced version of the "Super Training" feature from Pokemon X & Y, and is available to your Pokemon that have reached level 100, and can be used to boost their IVs.

If your unfamiliar to the world of high-end Pokemon training, Pokemon actually have two "hidden" sets of stats. EVs or "effort values" are stats that Pokemon earn by battling. Battling specific types of Pokemon increases a specific EV (for example, defeating a Geodude increases the defense EV) so it is possible to train Pokemon to have specific strengths and weaknesses.

IVs or "individual values" are a static set of stats that are determined when a Pokemon is born. Until now, there was no way to change IVs without mass breeding Pokemon, but now it looks like we'll be able to fine-tune them at level 100, possible evening them out completely.

Those who go see Pokemon the Movie: Volcanion and the Mechanical Magearna in Japan will get the Mythical Pokemon Magearna, who comes with a "Silver Bottle Cap" item - which seems to be important for the Hyper Training feature.