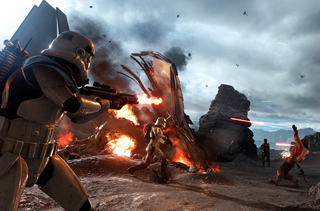 You can now play Star Wars Battlefront against bots offline or with friends.

The latest update to Star Wars Battlefront is live, and it adds a long-awaited feature to the game: Offline Skirmish mode. In Skirmish, you can play the Fighter Squadron and Walker Assault game modes against bots either solo or with a friend. Console players can also enjoy split screen gameplay in Skirmish.

Also included in this patch are tweaks to the partner system. Spawning checks will now occur every second, instead of every two seconds. One of the biggest changes is that you can no longer spawn on your partner when there is an enemy within 10 meters. Previously, this range was two meters, so this is a fairly major change. The update also balances a few aspects of the Bespin DLC.

You can check out the full list of patch notes (warning: it's really lengthy) over on the official forums.