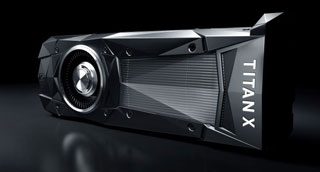 Nvidia's upped the ante atop the graphics card market again with a new version of the Titan X based on their new Pascal GPU.

Nvidia may have just released the GTX 1080, but they're not resting on their laurels. To prove it, they've announced their newest top-of-the-line graphics card: an updated Titan X.

The new Titan X will be available on Nvidia's website August 2 for those in North America and Europe, as well as for "select system builders." It's not clear who those "select" folks might be, but my guess would be boutique retailers like Digital Storm or Origin PC, for example. If you want one, you should check the status of your bank account, as this card will run you $1,200. You should also check the size of your case, as Nvidia says this card is the "biggest GPU ever built." Finally, make sure your power supply is up to snuff, as this card needs a whopping 250 watts.

After the GTX 1080 eclipsed the previous Titan cards in terms of performance (and price!), it was only a matter of time before Nvidia remedied that situation. I'm just a little surprised it happened this fast. I'm also a little disappointed that Nvidia missed out on the chance to call this one something like "Titan X2 - Revenge of the Titan."

You can see all the data on the new Titan X - and sign up to be notified when it's available - on the official website.