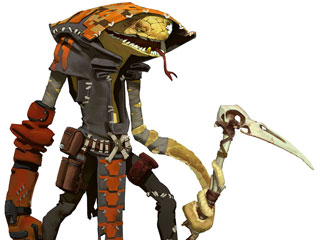 The newest Battleborn hero is coming early next month.

It's been a couple of months since Gearbox released Alani, the first additional hero for Battleborn, but the next hero is about to join the roster. Pendles is a Rogue stealth character that was first shown off back in May. Gearbox describes him as,

"A cold-blooded killer, Pendles hails from the same water-world as Alani, Akopos. As most adolescent Roa do, Pendles left home to explore and learn about other cultures. Completely unimpressed with these new learnings, Pendles found more enjoyment in murdering those cultures. Even better, people would pay him for his new found hobby. Don't let his sweet pair of sneakers fool you. This assassin will sneak up behind you, poison you, eviscerate you with duel kamas, then slink away again in a blink of his one remaining eye."

If you own the Battleborn season pass, you'll get access to Pendles one week early, on July 28, along with a hero key to unlock him immediately. If not, you'll have to wait until August 4, when he becomes available to the general public. Of course, you'll still have to pay 47,500 credits to unlock him, so if you really want to play as the sneaker-wearing Roa, you'll want to start saving now.