The phenomenal success of Pokemon GO continues. SensorTower, a mobile app tracking company, reports that over the weekend, Niantic's Pokemon game reached the 50 million download mark on Google Play alone. Since Pokemon GO launched in Australia and New Zealand on July 5, that means it took only 19 days to hit the 50 million install mark on Android. That's the fastest of any app ever made. It's also the fastest app to hit 50 million combined installs on iOS and Android, as you can see in the chart below. 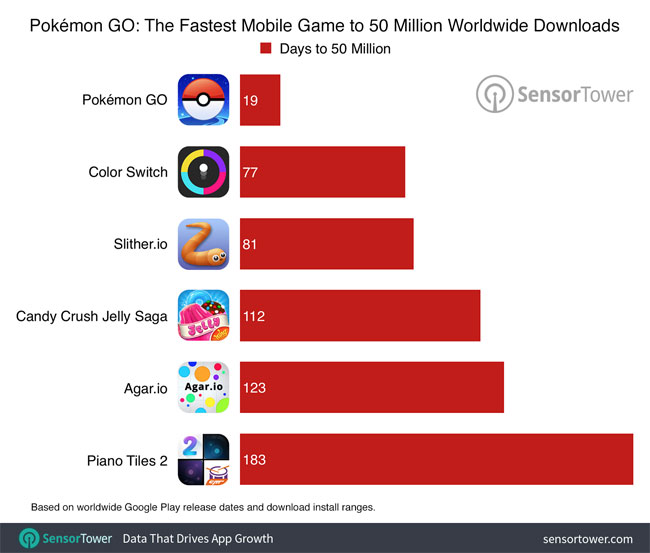 Furthermore, SensorTower estimates that Pokemon GO has now passed 75 million installs worldwide. This fact is made all the more impressive when you realize that the game has only launched in 32 markets so far. There are over 100 possible markets, so if Pokemon GO continues its success, the numbers could be staggering. SensorTower says that "It may not be unreasonable for the game to pass 100 million downloads in its first 60 days, especially if some of the planned gameplay updates hit sooner rather than later."

No matter what happens down the road for Pokemon GO, its success to this point has been almost mind-boggling to watch. The effects it's had on gaming, gatherings, and Nintendo's stock price has been amazing to watch. At this point, it's hard to be surprised by any record it breaks.