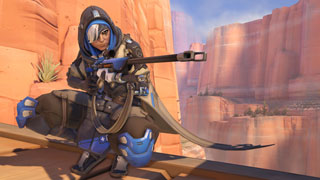 The latest Overwatch patch is strengthening Ana, and once again tinkering with McCree.

Blizzard rolled out a new patch to the PC version of Overwatch yesterday, and it was basically just make changes to two characters: Ana and McCree.

The newest Overwatch character, Ana, was added to the game last week. A support class healing sniper, Ana has shown up in a number of matches since launching, and Blizzard has decided that she needs a little buff. In this patch, the rate of fire for her Biotic Rifle has been increased by 20 percent, and its magazine size has been increased to 10 rounds. It's also worth mentioning that you will no longer instantly recover from her sleep darts if you're damaged. Instead, there's a 0.5 second delay.

Blizzard says that these changes are being made to up her effectiveness, as it's not where it should have been. The developer comments in the patch notes say, "While Ana has been very well received, she was showing to be a little bit weaker overall. In addition to helping her feel better to play, these changes should also increase her healing and damage output."

The other big change in this patch is to McCree. He's easily the most tinkered-with character in the game to this point, and in this patch, he gets tweaked again. This time, it's the damage falloff over range that's been changed. The distance at which his damage begins to drop has been shortened 10 meters, but the falloff amount has not changed. To help compensate a bit, Fan the Hammer has had its rate of fire increased 15 percent, and the recovery time on his flashbang has been reduced by 0.15 seconds.

Blizzard obviously felt that McCree was too effective at longer ranges, as their developer comments show. "McCree's latest range increase helped him quite a bit, but it was a bit too much in the right hands. This change weakens his long range damage somewhat, but still keeps it stronger than it has been in the recent past. The other changes combine to allow him to land more alternate fire shots on targets that he has hit with Flashbang."

Outside of these character changes, the only changes in this patch were bug fixes to character rendering, and a fix for a UI compatibility issue for ATI cards.

We'll have to see how these changes work out, but hopefully they can get McCree tweaked to where everyone is happy, and maybe leave him alone for a patch or two.