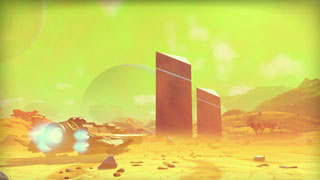 The newest trailer in the four-part No Man's Sky series is focused on survival.

The fourth and final video in the No Man's Sky series is here, and it focuses on what it will take to survive on harsh alien worlds. As we saw in the previous combat-focused video, you will definitely encounter wildlife on various planets, and some of it is, or can become, hostile.

In addition to protecting yourself from indigenous life, you'll also have to make sure you're safe from the elements as well. Planets will have varying environments, so you'll need to be prepared for both extreme cold and oppressive heat. You'll also have to be on the lookout for toxins and radiation.

You can upgrade your suit to provide more protection, and the trailer includes a very brief look at the menus you'll us to do that.