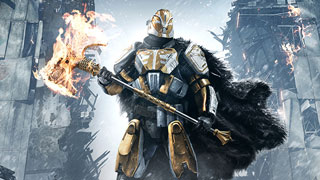 A listing for Destiny: The Collection was spotted on Amazon, and may be a re-release of the game.

If an Amazon listing that appeared briefly this morning is accurate, Bungie may be planning to re-release Destiny in the near future. The listing was spotted by Twitter user lifelower, who managed to snag a screenshot before it was taken down.

The listing (pictured below) sports an August 18 release date for Destiny: The Collection, and a price point of £49.99. This listing only mentions the Xbox version of the game, but it's a safe bet that if it is coming, it's coming to PS4 as well.

As you can see, there are no specifics on what's included in the "collection," but a safe bet would be the base game and all the expansions released so far, including the upcoming Rise of Iron. After all, Bungie released a similar edition last year that included The Taken King and all previous expansions.

With the news that the Rise of Iron expansion was not coming to PS3 or Xbox 360, it's not surprising that Bungie would try to offer up a package for players who might be upgrading to the newer consoles.

If the release date in the screenshot above is accurate, it would give players about one month to catch up before the Rise of Iron expansion launches on September 20.