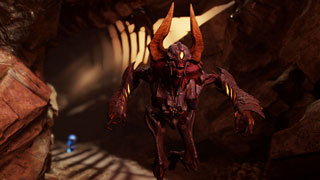 The first Doom DLC has a release date, and this weekend will see the second free update and double XP.

Doom's first DLC is Unto the Evil, and it finally has a release date. On August 5, you'll be able to check out the three new maps, a new player-controlled demon, and two new weapons: the UAC EMG pistol and the Kinetic Mine. Also included in the DLC are new armor sets, new patterns, colors, and taunts, and new hack modules as well.

To help get you ready for the DLC, tomorrow brings the second free update for Doom, and it's accompanied by a double XP event that runs through July 31. The free update adds a one-flag Capture the Flag mode for Exodus, a Capture and Hold mode for Sector, and also adds hell modules, a weapon wheel, and jump pads to Snapmap.

The Unto the Evil DLC will set you back $14.99 when it launches next weekend, unless you own the Season Pass, which runs $39.99 and includes all three planned DLC packs.