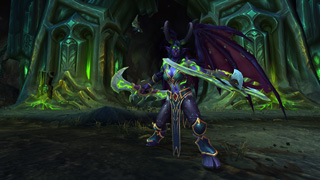 The Demon Hunter Class is coming a little earlier than expected to those who have pre-purchased the World of Warcraft: Legion expansion.

If you've been chomping at the bit to get your hands on World of Warcraft's new Demon Hunter class, your wait just got a bit shorter. When the Legion pre-patch landed a couple of weeks back, Blizzard was estimating that the Demon Hunter class would be available on August 17. Today, they've revised that, and we'll be getting it over a week earlier.

As you can see from the tweet below, you can expect to start seeing Demon Hunters in the game on August 9. The class will only be available on that date to those who have pre-purchased Legion, but it will be available to anyone who owns the expansion and has at least one level 70 character on their account once it launches. That level 70 requirement might sound onerous, but remember that you get a free level 100 boost when you buy Legion, so you can meet that requirement right away.

World of Warcraft: Legion launches on August 30, but the pre-patch with all the major changes is already in the game. You can find more info on that right here.