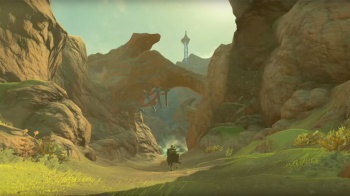 According to a new report, Nintendo is bringing out the big guns within months of the NX's launch.

MCV reports that Nintendo's mysterious NX console could be seeing not just The Legend of Zelda: Breath of the Wild, but also new games from the Mario and Pokemon franchises within six months of the console's launch in March 2017. This is in addition to the third-party support the console will be seeing from the likes of Sega, Square Enix, Ubisoft, Activision and Warner Bros.

The latest NX rumors describe a "high-powered handheld console" with two detachable controllers on either side of the screen, along with a base unit dock station that allows for playing games on a larger screen. MCV says that "sources close to Nintendo" are calling these rumors "100 percent accurate."

Nintendo responded to the NX rumors with the following statement: "Nintendo has not made any new official announcements regarding NX which is due to launch in March 2017. As such [we're] unable to comment on the various rumours and speculations circulating."

MCV reports that the graphics will be "somewhere between a PS3 and PS4," and that Nintendo will be attempting to target an audience "that sits between smartphone gamers and the more hardcore users of PS4 and Xbox One."

"It's a nice bit of kit, a bit of a novelty, but a good one," according to one source. "It won't appeal to PS4 fans. Nintendo seems set on trying to upgrade smartphone gamers. That's going to be a big job for the marketing department."