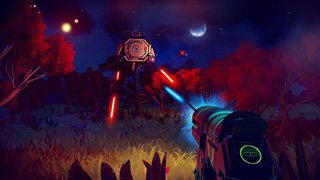 No Man's Sky is out on PC today, and Hello Games is working on a patch to address the "most critical issues," plaguing the game.

No Man's Sky launched on PS4 on Tuesday, and will be available on PC later today, but the launch hasn't exactly been flawless. In a new blog post on the game's official site, game director Sean Murray says that the team is "tracking a number of issues, bugs and crashes that players are reporting, and working to resolve as soon as possible."

To that end, the company has brought on a new Quality Assurance (QA) team today. Murray says that this new QA team actually larger than the entire team at Hello Games, and that this team will be in addition to the existing QA team at Sony.

Meanwhile, the development team is working on a patch to address what Murray calls the "most critical issues," and this patch will be available "in the near future."

For those facing issues with the games, Murray recommends checking this thread on the Sony forums or contacting Hello Games through their website. He also announces that the company will be moving to a tickets support system next week, and that they have hired someone specifically to manage it who will start Monday.

Murray also offers up some workarounds for known issues. They include:

A couple of other fixes were mentioned directly. If you haven't received a pre-order bonus owed to you, Murray says that, "In most cases so far, the player has either not redeemed their bonus correctly from the PS store or from the Options Menu. Also sometimes players have received the bonus, but the name displayed in-game was incorrect. The Alpha Vector ship is named Domanish S84 in-game, and (in the US) the Rezosu AZ65 is named Final Shadow XIV in game."

If you're one of those folks who sold off your pre-order ship only to find yourself without a hyperdrive, Murray writes that the game should direct you to a nearby NPC that will provide the hyperdrive you need. If this doesn't resolve the issue, he says that, "Some other players were able to resolve this issue by restarting their console."

The upcoming will address a number of these issues, and Murray says that it will include crash fixes as well. He also encourages users who are facing problems to reach out to the company through its Support page. You can read the full blog post here.