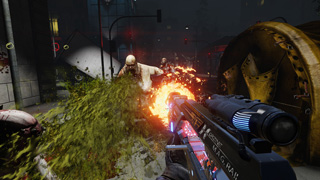 After 16 months on Steam Early Access, Killing Floor 2 is releasing on PC and PS4 in November.

Tripwire Interactive's Killing Floor 2 is finally preparing to exit Steam Early Access. Set a month after the events of the first game, Killing Floor 2 drops players into Europe, where the Zed invasion has spread, forcing the survivors into hiding. Specimen clones are everywhere, and you're one of a group of civilians and mercenaries that are gearing up to fight back.

Killing Floor 2 will feature co-op play with up top six people, as well as solo play. You can also take on your friends and others in the game's 12-player PvP Versus Survival mode that pits a team of Humans against a team of Zeds. Also included: plenty more gore, powered by what the press release calls, "a proprietary, high powered persistent blood system." You can also expect plenty of weapons, more perks, and new and old Zeds to fight against.