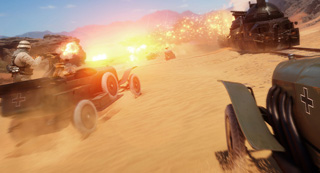 EA and DICE have confirmed the official dates for the Battlefield 1 Open Beta, and it's just a couple of weeks away.

If you've got your sights set on the Battlefield 1 beta, your wait is almost over. EA and DICE announced in a blog post today that the open beta will begin on August 31 on PC, PS4, and Xbox One. Battlefield Insiders will get early access to the beta. No one has said how long that early access will be, but rumor has it that it will be three days.

If you want to get in on the early access, you need to be signed up as a Battlefield Insider before August 21. You should also make your platform selection as soon as you sign up, or else you'll miss out on a code.

The beta will include Conquest and Rush modes on the Sinai Desert map, which the official post describes as, "A scorching hot battlefield located just East of El-Jifar. From infantry skirmishes in the narrow streets of the village of Bir el Mazar to dogfights above the majestic cliffs, you'll need to make tactical use of the dunes as you engage in explosive battles. When all hope is lost, reinforcements will arrive in the shape of a powerful Behemoth: a deadly Armored Train charging through the desert sands." There's a much better look in the new Gamescom trailer:

If you want in, all you need to do is head over the Battlefield Insider site, sign up, and select your platform preference. You've got until Sunday to get it done.