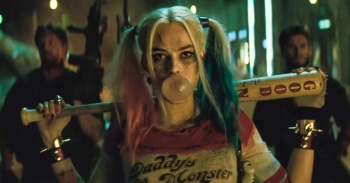 After its record-breaking debut weekend, Suicide Squad reigned supreme atop the box office in its second weekend, grossing $43.5 million, which is a 67.4% drop from the previous weekend. For comparison's sake, Suicide Squad broke a record previously held by Guardians of the Galaxy by almost $40 million, but in their second weekends it only beat the James Gunn-directed movie by just over $1 million. The 67.4% drop is only slightly less than the 69.1% drop that Batman v Superman saw in its second weekend.

Coming in second place was the vulgar animated comedy Sausage Party, which grossed over $34.3 million. Given its reported budget - between $19 and $30 million - it's looking to be a pretty large success. It was a project that studios didn't want to take on, but it looks like Sony made a smart decision distributing and co-financing it. Pete's Dragon, the widest new release of the weekend, grossed $21.5 million, which puts it in third place. Given how much marketing it had, that has to be a disappointment.

Florence Foster Jenkins was the week's third new wide release, debuting to a modest $6.6 million and opening in eighth place. Meryl Streep may be nominated for another Oscar based on her performance, but audiences didn't seem to have much interest in it.