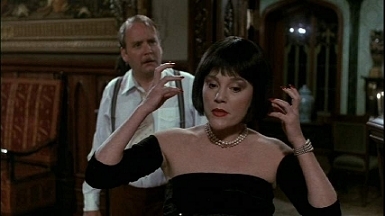 After a prior attempt at remaking the adaptation Clue failed, 20th Century Fox and Hasbro are taking another stab at the classic whodunit.

The Tracking Board reports that a remake of the 1985 cult classic boardgame adaptation Clue is in the works, courtesy of 20th Century Fox and Hasbro Studios. The remake will be produced by Josh Feldman, with the plan of telling the story of a "worldwide mystery" with "action-adventure elements." The long term goal appears to include setting the stage for an ongoing international franchise.

An earlier attempt to remake the film was dropped by Universal in 2011. Director Gore Verbinski was to direct then, and it's unclear if he will be involved in the upcoming remake.

The original film featured a brilliant ensemble, including Tim Curry, Christopher Lloyd, Madeline Kahn, Michael McKean, Lesley Ann Warren, Martin Mull, and Eileen Brennan. No cast has been announced for the new project, and it's unclear whether Curry will be making an appearance. The film was seen as a flop in theaters, but ultimately developed a large audience and cult following.