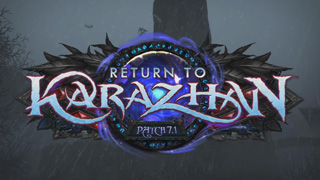 Even though World of Warcraft's Legion expansion isn't out yet, but Blizzard is already showing off the content that will be coming after the launch.

World of Warcraft: Legion won't launch until August 30, but Blizzard announced the first post-expansion patch at Gamescom yesterday. The patch is titled "Return to Karazhan," and will feature the Burning Crusade-era raid returning as a five-man dungeon with all nine original bosses. Unlike some of WoW's dungeon updates, the new Karazhan won't replace the old one. The old 10-man level 70 raid will still exist, and players will still be able to run it or farm it.

There's more in patch 7.1 than just Karazhan, though. There's a small raid that falls between The Emerald Nightmare and The Nighthold. This raid will wrap up the Stormheim story. You can also expect to see new Suramar outdoor content that will push the Nightfallen story forward.

Blizzard also spoke at Gamescom about their philosophy on expansions. You might remember a couple of years back when Blizzard was talking about increasing the pace of expansion releases for WoW. The company has done an about face on that, saying this philosophy caused sacrifices that shouldn't have been made. The new plan is to release a steady stream of content, even while working on new expansions. Blizzard also acknowledged the importance of not letting players run out of things to do. Finally, they promised that they would be working to ensure that there was no content drought for players in the Legion expansion.

While the return of Karazhan will definitely be exciting to veteran players (and a very cool experience for those that weren't playing during Burning Crusade), I don't expect most players to take Blizzard's promise of no content droughts without a huge grain of salt. After all, these are words we've heard before. That said, it's nice to see any company, especially one as large as Blizzard acknowledging that it may have miscalculated. Now it just needs to prove to gamers that it's learned from the experience.

World of Warcraft: Legion launches August 30, and Blizzard says that the "Return to Karazhan" patch will land on the Public Test Realms shortly thereafter.