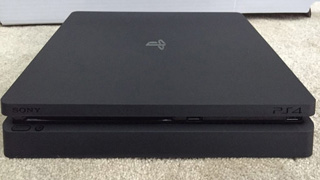 Pictures of a new PS4 unit and a Wall Street Journal report would seem to point towards a new, cheaper PS4.

Update: Eurogamer has confirmed the existence of the PS4 Slim, having driven out to the original leaker's house to witness the console for themselves.

Original Story: Sony has an event coming up on September 7 at which they are expected to show off the new PlayStation 4 Neo. But if rumors bouncing around the internet are true, that might not be all that Sony introduces.

Twitter user shortman82 noticed a listing on his local classifieds for what looked like a new PS4 Slim. He said that the listing was from a "Guy runs a shop and saying its out in 3 weeks." He purchased the unit, opened it up, and posted a bunch of photos of the unit online.

While the unit may or may not be real, a report in the Wall Street Journal seems to confirm that such a unit is coming. The article says that, "Sony Corp. plans to introduce a new PlayStation 4 standard model alongside a high-end version next month, people familiar with the matter said, in an effort to maintain demand for the best-selling videogame console."

You can see the shots of the unit below, including comparison shots with the current PS4. This unit is slightly smaller in all dimensions, but there's still no word on what components it will include. I'd expect to see similar performance in a smaller package, and with a smaller price point as well.

It's not surprising that Sony would have a cheaper option up its sleeve, as Microsoft has just rolled out its slim model, the Xbox One S. We'll get all the details at Sony's September 7 event.