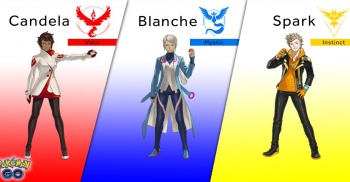 Pokemon GO's Team Leaders now have a bit more of an active role in the game.

Pokemon GO's gym battle system is probably one of its most, lacking features. Nothing is ever really explained to new players about how it works, and the actual battle system behind it seems to be about how fast you can tap the screen. A small update to the game aims to improve the gym experience for new players, as well as giving the game's three "Team Leaders," who are only ever glimpsed as silhouettes upon reaching level 5, a bit more of an active role.

The new feature is called "Pokemon Appraisal." Upon entering a gym, the player's respective Team Leader (Candela, Blanche or Spark) will tell the player about the defending Pokemon's attack and defense capabilities, and offer suggestions on which of the player's own Pokemon to send into battle.

It's a small update to be sure but it does slightly alleviate one of the more frustrating parts of the game, particularly for players new to the whole Pokemon thing who are unaware of type-weaknesses.