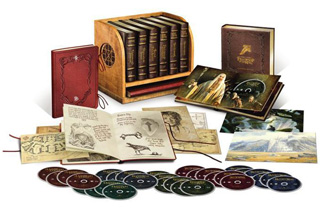 You can get the extended edition of all six Peter Jackson films, as well as art, a sketch book, and over 70 hours of bonus content, but it will set you back a pretty penny.

There have been rumors of a mega-collection of Peter Jackson's two Middle-Earth trilogies - The Lord of the Rings and The Hobbit - for a week or so now, and it turns out that the rumors are (unsurprisingly) true. There's a massive new collection of films, bonus material, and extra goodies, but it comes at a steep price - $800.

Currently listed on Amazon as on sale for $599.99 (with a regular price of $799.99), the collection includes all six Middle-Earth movies. Each movie is presented in its extended-edition format and stored in a faux-leather book binding. The set also includes a wooden shelf to store the films on.

You'll also get every piece of bonus content and extra footage that's been released, which adds up to over 70 hours of additional footage. The extras for The Hobbit are on Blu-Ray, but The Lord of the Rings extras are on DVD.

Also included is a replica Red Book of Westmarch full of sketches and artwork from the films. You'll also get original, frameable reproductions of watercolor paintings by conceptual artists Alan Lee and John Howe.

While that is a lot of additional content, what it doesn't include is the additional footage that Peter Jackson has been talking about creating for years. Word was that there were plenty of never-released deleted scenes, bloopers, and more, but they're nowhere to be seen here.

Honestly, if you're a fan of the series, you probably already own these extended edition releases, and you'd be paying $600 (or more) for new covers, a wood shelf, an art book, and some watercolors. If you don't own the films and you're into this, go for it, but unless those extras are a huge selling point for you, you'd be better off buying The Lord of the Rings ($59.98) and The Hobbit ($64.99) trilogies by themselves.