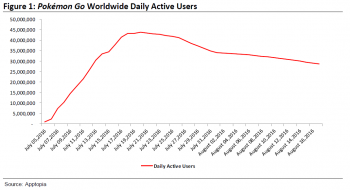 Is the Pokemon GO fad already starting to self-destruct?

Pokemon GO was a pretty huge phenomenon when it first launched last month, making a boatload of money for Nintendo and being downloaded over 50 million times. But a report from Bloomberg suggests that it may already be in decline, as it's daily user base has dropped by 15 million users in the last month.

As you can see in the chart above, the daily user count peaked at around 45 million, and has since dropped all the way down to just 30 million.

Axiom Capital senior analyst Victor Anthony says that investors in companies like Facebook, Twitter, and Snapchat "have been concerned that this new user experience has been detracting from time spent on other mobile focused apps." With the downturn in Pokemon GO's mindshare, Anthony says investors can rest easy.

"The declining trends should assuage investor concerns about the impact of Pokemon GO on time spent on the above named companies," wrote Anthony. He said that if the decline in users continues, it could spell trouble not only for Pokemon GO but also augmented reality in general, adding that "interest in virtual reality remains high."

What do you guys think? Personally, despite an initial surge in playing, I haven't really touched the game very much at all in the last couple weeks. There's nothing like turning it on and seeing nothing but Weedles and Rattatas for miles to discourage me from playing...