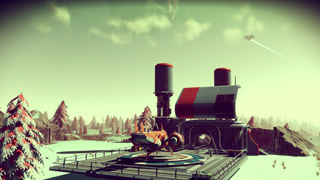 No Man's Sky launched to great fanfare, but its player counts have dropped dramatically since then.

When No Man's Sky launched on August 12, there were a number of people looking forward to playing it. This was evidenced by the game's concurrent player count, which peaked at 212,604. Today, it's down to just over 19,000 - a drop of around 90 percent. Now, there are some caveasts to those numbers.

First off, these numbers only represent concurrent player counts - that is players who are online at the same time. They don't necessarily represent the full size of the community, although they are representative. However, VG247 reported that the UK charts showed an 81% drop in sales in its second week.

While these numbers represent a huge drop, it's not unprecedented. Other games have seen similar drops in the past, including Fallout 4 (74 percent in first month), Battleborn (82 percent in first month), and The Witcher 3: Wild Hunt fell by 71 percent in its first month. It's not terribly unusual for games, especially games that have a lot of hype, to lose a lot of their concurrent players once the excitement around launch has died down. It can be even worse in the case of games that face issues, as No Man's Sky has on PC.

That said, a 90 percent drop is still statistically significant. Many players have expressed their disappointment in the game, and there was even a Reddit post that spawned an entire website documenting the features that players have found missing.

If you haven't been following No Man's Sky, checking out Yahtzee's review in this week's Zero Punctuation is a great place to start.