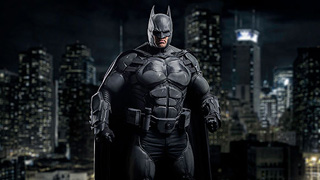 This may be the coolest fan-made Batman suit of all time.

Cosplay is something that many gamers love to get into, but one Irish cosplayer may have topped them all with his amazing Batman suit.

Julian Checkley is a veteran of the film industry, having worked in both model-making and creature effects. He brought that knowledge to the world of cosplay when he created a Batman suit with 23 working gadgets. That was enough to grab the world record for "Most functional gadgets on a cos-play suit."

The 23 gadgets included in the suit are inspired by both classic Batman gadgets and gadgets from Batman: Arkham Origins. Speaking about the suit, "There were many long hours trying devising the gadgets and finding ways to store them on the suit. They are classic gadgets but also some are specific to Batman: Arkham Origins. I am immensely proud of my Guinness World Records title and to be part of the Gamer's Edition is just the next level."