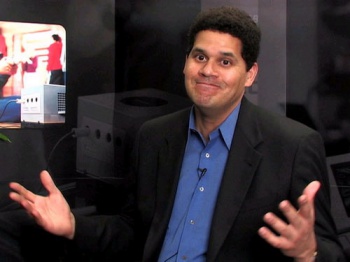 Nintendo's Reggie Fils-Aime recognizes that the Wii U launch wasn't as good as it could have been.

Speaking with A-list Daily, Nintendo of America boss Reggie Fils-Aime said that the company "has to do better" with the launch of it's upcoming NX console.

Reggie is no doubt referring to the whole debacle regarding the Wii U's launch. Because of it's similar name, controllers and appearance, many thought that the Wii U was simply an optional add-on to the original Wii console, rather than something completely new and unique. Similarly, many thought that "Wii U" branded games would be compatible with their old Wii consoles.

Additionally, Reggie said that "We have to do a better job from a software planning standpoint." Again, "unique Wii U experiences" were rather thin on the ground when the console first launched, and rather than launching alongside flagship Nintendo franchises... we got Nintendo Land. It looks like the company isn't aiming to repeat that, with the NX launching alongside big-hitter Zelda: Breath of The Wild.

We're still not exactly sure what the NX will be, with the current rumors reporting that it's an entirely portable console with detachable controllers. Hopefully we will hear some more info on it in the coming months.