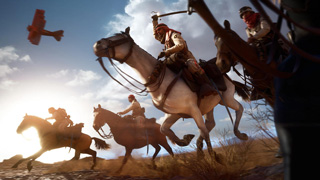 The Battlefield 1 starts tomorrow, but Battlefield Insider members are getting keys today.

If you're a Battlefield Insider member and you speciofied a platform preference for the Battlefield 1 beta, you might want to check your inbox. EA is sending out keys for the open beta. Officially, the beta kicks off tomorrow, but the 24 hours of early access for Insiders has already begun.

If you're not an Insider member, you will be able to join the beta tomorrow without needing a key. Neither DICE nor EA has announced the end date for the beta.

If you're playing on PS4, you won't need PS Plus to give the beta a go. Unfortunately, Xbox One owners will have to have Gold to participate.

The Battlefield 1 beta will feature two game modes: 64 player Conquest and 24 player Rush. It will include only the Sinai Desert map, which will let players use horses, an armored train, planes, and dynamic weather.

Battlefield 1 launches on October 21 for PC, PS4, and Xbox One. Its Premium Pass will add the French army early next year.