You'll be able to choose between six different 4,000 gold heroes to get for free.

Update: Blizzard has confirmed that this is indeed a limited time deal. It hasn't decided on when the promotion will end right now, but says it will give plenty of warning before it does.

Original Story:Love it or hate it, Blizzard's Heroes of The Storm utilizes the "game is free but heroes cost money/gold" system that League of Legends popularized. So, if you want to build up a roster of heroes, you'll have to either play the game quite a lot or lay down some dough. Sometimes Blizzard helps out a bit though, like with this upcoming promotion that will grant every single player a free 4,000 gold cost hero. 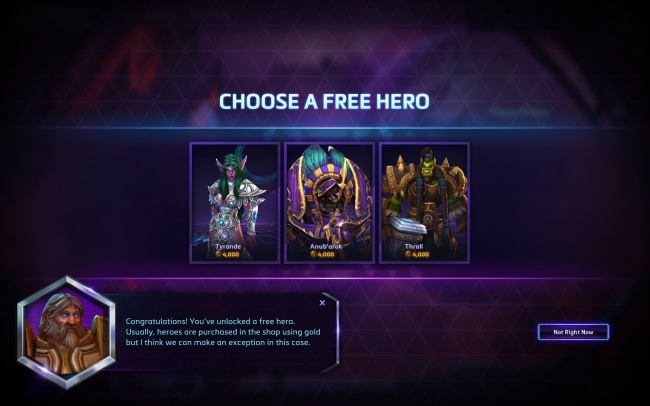 From September 13, when the game's upcoming StarCraft-themed mini-expansion launches, everyone who logs into the game will be given a choice between receiving Tyrande, Anub'arak, or Thrall for free. If you already own all three, they will be replaced with Nazeebo, Sonya, and Uther. If you're Mr. Moneybags over here and already own all six, then Blizzard will just straight up give you 4,000 gold. It's a pretty sweet deal all-in-all.

As of now, we don't know if this will be a timed event or a permanent thing for new players, as Blizzard did not specify an end date. We have reached out to a representative for clarification.