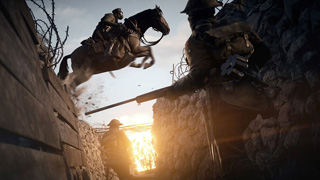 DICE is asking players to suggest maps that could be added to the open beta before it ends Thursday.

The Battlefield 1 beta kicked off last week, and plenty of gamers have strapped on their World War 1 outfits to give it a try. Unfortunately, the beta only includes one map - Sinai Desert - and lots of Battlefield players are tired of getting sand in their shorts.

Players have taken to Twitter to ask DICE for a new map, and the official Battlefield twitter has responded. The company is asking players to submit map suggestions in the open beta forums (you'll need to be logged in on an account with beta access to see them).

It's worth noting that DICE hasn't guaranteed a new map, even though they are taking suggestions. Furthermore, the open beta is currently set to end this Thursday, September 8, so even if they do add a new map, there won't be much time to explore it.

Once the beta is over, you'll have to wait until the game launches on October 21 for PC, PS4, and Xbox One to check out the rest of the maps.