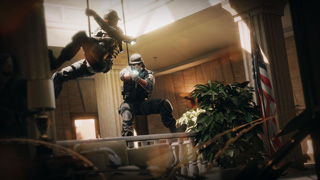 A second season pass could be on the way for Rainbow Six: Siege if a survey leaked on Reddit is accurate.

Rainbow Six: Siege launched on December 1, 2015 - nearly a year ago. Along with the game, they also offered a season pass, like most other games do. If a survey that popped up on Reddit is accurate, Ubisoft may be considering offering up a second season pass in the near future. The screenshot of the survey mentions uniforms, a monthly exclusive skin, and other customization items.

The survey asked for respondents to rank a list of items that could be included in a "future Season Pass." Ubisoft said when the game launched (on the game's Steam page) that the original Season Pass would only cover items through December 1, 2016. The Season Pass doesn't cover major expansions that add operators and maps, as those have all been free. What it does include is early access to the operators, exclusive cosmetic items, and discounts on in-game store purchases.

Obviously, a survey isn't a confirmation, but a second Season Pass wouldn't be a huge surprise. Back when Rainbow Six: Siege launched, Ubi said that they planned to offer all post-launch maps for free. They also said that they had "ambitious post-launch plans" for the game. A second year of content would certainly fit into that sort of plan.

I'll be curious to see how this news is received. While some people will certainly frown on a second Season Pass for a game, I do think it's worth arguing that we'd rather have more content via a new season pass than a sequel that we have to buy all over again (and probably another Season Pass anyway). Let us know how you feel in the forums.