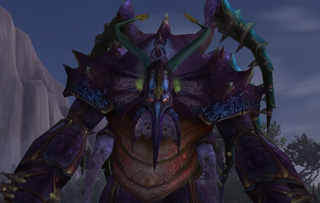 World of Warcraft is a game filled with secrets, and players just uncovered another big one.

World of Warcraft players are notorious for digging deep into the game, even if it means mining the game data for secrets. While data-mining Legion, a reference was found to a boss named Kosumoth the Hungering, who has a chance to drop an epic mount and an epic pet. He was seen in the beta, but he was nowhere to be found in the live game. No one knew how to spawn him, either.

Meanwhile, WoW players have been hunting for a hippogryph mount with a particular skin since 2007. Discovered when data-mining patch 2.3, the skin has never appeared in the game. While scouring Azsuna for clues to the mount's whereabouts, players discovered a number of secret caves, and within those caves were found orbs. The orbs matched up with an orb found next to an orc hermit named Drak'thul. Moreover, there are a number of pebbles scattered on the table near Drak'Thul. Superimposing those pebbles onto the map of the zone yields the rough location of all 10 of the Hungering Orbs.

Clicking on all the hidden orbs in the proper order doesn't get you the hippogryph mount, though. Instead, it will summon the aforementioned world boss, Kosumoth the Hungering. The message that pops up in the game reads,

"Azeroth itself recoils as unleashes an ancient evil. Kozumoth the Hungering walks the land once more..."

Apparently when Kosumoth is spawned, he is spawned for the whole region, and everyone is notified that he is up. If you can survive the encounter (he has an AoE Shadow Bolt attack that hits all enemies for 10 million damage each), there's a chance you could get the Fathom Dweller mount or the Hungering Claw pet, if you're lucky with drop rates.

Blizzard loves their secrets, so you can bet that we'll see more discoveries like this in the future. Here's a video of the boss going down: