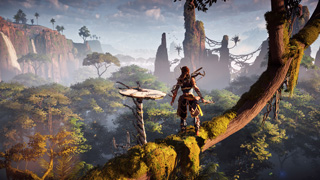 There's some new gameplay footage for Horizon: Zero Dawn that was shown off at yesterday's PlayStation Meeting.

Yesterday, Sony held a PlayStation Meeting in New York, where they showed off the PS4 Slim and the new PS4 Pro. As part of that meeting, they also showed off some new gameplay footage from upcoming Guerrilla Games action title Horizon: Zero Dawn.

The footage features main character Aloy stalking a huge dinosaur-like robot. She stealthily takes out a smaller robot, then scales the larger robot in the style of Shadow of the Colossus. Once she gets to the top, she rewires the creature before rappelling to the ground.

The game looks gorgeous, although Art Director Jan-Bart Van Beek did reveal that Horizon: Zero Dawn will not be natively rendered in 4K. He did say that the final game would be "so close" to native 4K that most people would not be able to tell the difference.

Horizon: Zero Dawn is set to launch for PlayStation 4 on February 28 of 2017.