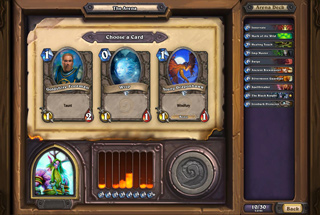 The Hearthstone Arena is in for a shakeup in the next patch, as Blizzard plans to exclude a number of popular cards from the format.

If you've got a few favorite cards that you like to see pop up in Hearthstone's Arena mode, you might have to rethink your strategies soon. In a blog post yesterday, Game Designer Dean Ayala discussed the next patch for Blizzard's digital card game.

The short version of the post is that Blizzard wants to bring the Arena game mode into balance, so that you can choose any class without "feeling disadvantaged." If you haven't played Arena, it offers you the choice of random cards to build a deck, and then see how many matches you can survive. Your Arena run ends with 12 wins or three losses, whichever comes first.

While a number of different ideas for balancing the game mode are discussed, but the first one that's coming in an upcoming patch is the removal of a whole bunch of cards. With the exception of Paladins, every class will be losing some cards. Here's the full list of cards that are getting the boot:

There may be more changes coming down the road, as well. The blog post mentions giving designers the ability to adjust the rate at which particular cards appear in drafts, as well as the possibility of drafting by card rarity. Those are possible future changes, but for now, players will need to be prepared to adjust to the removal of these popular cards. There's no word on when the patch might be released, and the blog post simply refers to it as "an upcoming patch."