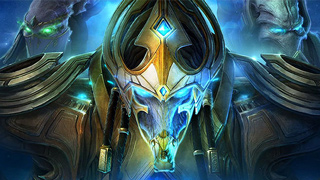 Blizzard may be about to start selling new announcer voices, skins, and more for StarCraft 2.

Imagine Morgan Freeman telling you to build more pylons, or that you need more Vespene gas. If a survey that popped up on Reddit is to be believed, that might be an option you purchase from Blizzard in the not-too-distant future.

The survey lists a number of items that could appear as microtransactions in StarCraft 2, and asks the user to rate their interest in each of them. It includes chat emoticons, unit skins, and most interestingly, a wide array of possible voice over announcers that could be added to the game. You can see the full list in the image to the right, but a few of the options are:

Despite an admonition on the survey to not share the contents o0f the survey, it was posted in its entirety to imgur, and can be seen below.

While Blizzard hasn't made an official statement on the leak, one of their community managers responded to the Reddit post revealing the survey, saying,

Odds are that we'll hear more about this and any other plans Blizzard may have at Blizzcon in November.