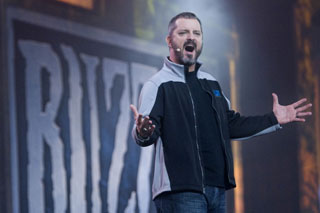 Chris Metzen has been a part of Blizzard for almost 23 years, and is one of the most recognizable faces at the company. He's the voice of Thrall, and he's been the creative director on every Blizzard game since Warcraft III. But today, Metzen is retiring to spend more time with his family.

Speaking about his time at Blizzard in an open letter posted on the World of Warcraft forums, Metzen wrote,

"I had just turned twenty years old when I started working at Blizzard. Seems like a lifetime ago. Guess it was...For nearly 23 years I've had the very distinct privilege of shaping worlds and building games with the brightest creative minds in entertainment. I've walked with giants (and stood on some giants' shoulders, too). In short, I've had the time of my life."

Metzen joined Blizzard in the early 90s, and worked on Warcraft: Orcs and Humans. He was instrumental in creating the Diablo and Starcraft universes. He also voices a number of Blizzard characters, including Thrall, Vol'jin, Varian Wrynn, and Ragnaros in World of Warcraft. He's also the voice of Bastion in Overwatch, a game that he was creative director for as well.

Lest you think that Metzen is leaving to join another company (maybe former colleague Rob Pardo's new studio, he spoke directly to that in his open letter, saying,

"The reason I use the word 'retire' is because I'm not going to some other company or starting up new projects or anything remotely like that. It's been a long, amazing stretch of years. Now it's time to slow it down. Rest. Lay around on the couch and get fat."

Blizzard certainly won't be the same without Chris Metzen, and it will be weird seeing Blizzcon without him on stage. That said, he is certainly leaving the company in great shape.