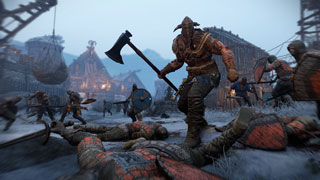 The upcoming Ubisoft action game For Honor will have an alpha test later this week, and you can sign up now.

Ubisoft has announced the details of the For Honor alpha test in a press release. It will start on September 15 and run through September 18. The test is set to be available on PC, PS4, and Xbox One, and will give players a chance to try out the hack-and-slash title.

It will include the four warriors that have been announced so far. That means that players will get to try out the Kensei, Orochi, Warden and Raider. It will also add two new warriors, the Conqueror and Berserker. You can see each of these classes shown off in official videos on this YouTube playlist. Ubisoft says that the test will be "a work-in-progress slice of the multiplayer content with a limited number of players in order to generate feedback and assess for stability."

Also included in the test will be the progression system, which will let players unlock new abilities, new weapons, new armor, and visual customizations. Three of the game's multiplayer modes are included in the test, including Duel (1v1), Brawl (2v2), and Dominion (4v4 mode).

If you want to participate in the alpha, you can sign up over on the game's official website. For Honor is set to release on February 14, 2017.