In over a decade since The Escapist was founded, there's been one single question asked more than any other question: Are you Yahtzee? The answer has always been "no," except when we wanted to practice our bad British accents, but nobody ever bought it for more than a moment. Now, we put the internet to the true test. This week, beginning September 21, Zero Punctuation's Ben "Yahtzee" Croshaw will be joining The Escapist's team full-time to take on more content, as well as getting some face time with our Twitch community! 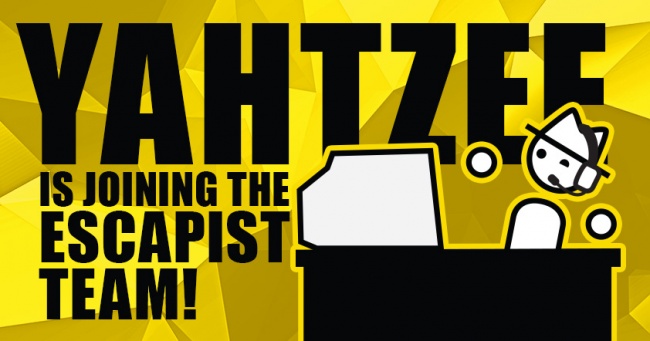 Yahtzee has been a fan favorite for ages, and he's been a staff favorite for just as long. The Zero Punctuation style is more or less its own subgenre at this point, and the series has been the origin of a number of the internet's greatest memes, like the Glorious PC Gaming Master Race.

I can keep going, but I expect that if you're reading this, you have an idea of who Yahtzee is, and why this is fantastic news. Starting Wednesday, September 21, Ben "Yahtzee" Croshaw will be spending some time streaming whatever game he reviewed that week on our official Twitch channel! Follow us now, and join us for his debut!

"We are excited to introduce our newest employee, Yahtzee Croshaw, to the Escapist community! We hope he will be as well-received and popular as prior content creators such as - wait," said Alexander Macris, co-founder and general manager of The Escapist. "We are excited to bring you more stuff by the man you love. PC Master Race 4 Ever."

You've (I'm not going to lie. So have we.) been asking for this for years. Ask and ye shall (eventually) receive!