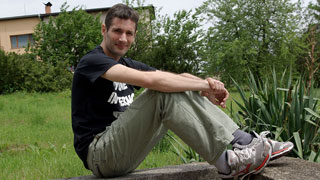 Dean Hall is working on a new game, and it's being funded by Chinese online gaming company Tencent.

It wasn't that long ago that Dean Hall was the toast of the modding world. As the creator behind Day Z, one of the most popular ARMA 2 mods of all time, Hall went on to have his mod taken up as a standalone game. He eventually ended up taking a job with Bohemia Interactive, which he left in late 2014 to form his own studio, RocketWerkz.

Now Hall is working on a new triple-A game, and it's being funded by Chinese online gaming company Tencent, but it isn't publishing the new game - it's an investor in Rocketwerkz. Hall spoke with Eurogamer about the new title, but he was not very forthcoming with any details about the new project.

"What I will say is it's multiplayer," Hall said. "We're really drawing a line in the sand here and saying ... that's where we want to be planting our flag in the ground; carving out new territory in terms of new multiplayer genres, or re-purposing different parts of other genres."

"I believe it's a gap in the market. For that reason I'm going to be pretty coy about exact specifics of it - also because of expectations and how experimental we are at the moment. I need to be deliberately coy; I need to avoid a kind of War Z situation."

There's no word on when we might see more about Hall's new game, but it's definitely ambitious, and it sounds like he's learned a bit about managing expectations and hype as well. Fans of DayZ would be well-served to keep an eye on his progress.