A group of Hearthstone fans has created a site that lets you watch replays of your Hearthstone games.

Ever since Hearthstone launched in 2014, players have wanted to be able to watch previous matches over again. Maybe they want to see what combos worked the best against a specific deck, or they just want to watch a really great win again. So far, Blizzard hasn't offered that functionality, but a new website made by fans is stepping up to fill the void.

HSReplay.net first popped up in a post on the Hearthstone Reddit. It's a new site from the creators of the Hearthstone Deck Tracker. It records all your games, and lets you watch them again and share them with friends. 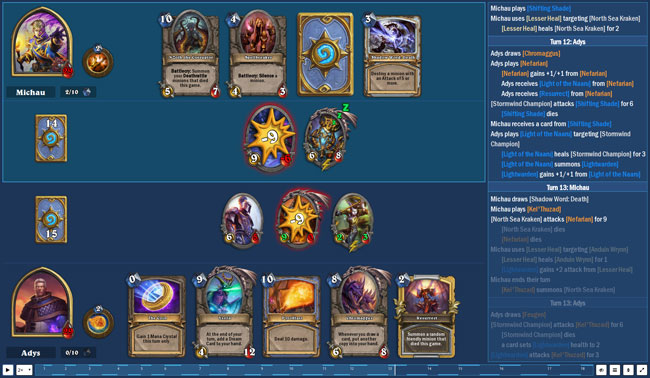 All you have to do is download Hearthstone Deck Tracker. If you're not familiar with that app, it tracks your wins and losses, and includes options to show you which cards your opponent has used, and which cards in your deck you haven't drawn yet. With the app downloaded, you need to connect your Battle.net account to HSReplay. Once that's done, you just have to play Hearthstone.

Your matches are automatically recorded and uploaded to the site, and you can go watch your replays right in your browser. You can also show off that one great win you got to all your friends, over and over again.

The initial Reddit post includes a link to this example replay, which should give you an idea of what you can expect. It's a fairly new site, so you can probably expect some bugs or other issues, but for a first effort from a group of fans, it's pretty darned impressive.

You can start watching your replays by getting set up on HSReplay.net