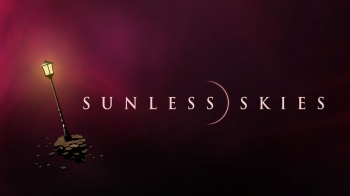 Sunless Skies takes the roguelike action of Sunless Sea into the stars.

Failbetter games today announced that it is working on a sequel to its roguelike hit Sunless Sea. The new game will be called Sunless Skies, and will expand upon the creepy Victorian-era steampunk fantasy, by taking things into space. A Kickstarter for the game will kick off some time in February next year, so don't hold your breath quite just yet.

"This is the Victorian Empire in space - the High Wilderness - a "blistering, wonderful night" among the thrones and domains of the stars. The Empress has abandoned London and led an exodus to the High Wilderness, to carve out a new British Empire. With the Empire being increasingly authoritarian, bohemians, revolutionaries and outcasts - like you - are trying to make a life for themselves on its fringes," wrote the dev in a blog post.

The game will be released on the same platforms as the original, Windows, Mac and Linux, and will once again be utilizing the early access model. Gameplay wise, we are told it will play quite similar to Sunless Sea - "We're enhancing the stuff we liked, and refining the experience."