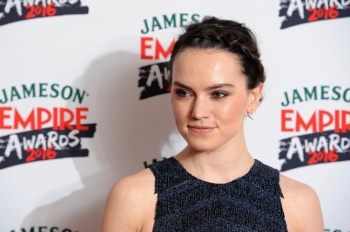 The Star Wars actor is joining an already solid cast.

In 2018, we're going to get a live-action/animation hybrid version of Peter Rabbit, an adaptation of the children's books written by Beatrix Potter. Why? Because money, that's why. Honestly, I didn't even know this was going to be a thing, but after reading up on it, I have mixed feelings.

First, the news. According to Variety, Daisy Ridley, whose most famous role is Rey in the Star Wars franchise, has joined the cast - right now in an unspecified role. She, alongside Elizabeth Debicki, joins a cast that already contains Rose Byrne and James Corden, the latter of whom will be voicing the eponymous bunny. That is a talented cast, and it's likely only going to get bigger.

However, the new movie is going to be a hybrid of live-action and animation about a bunny, which didn't exactly work that well the last time it was done - although there is at least one example of this working. Peter Rabbit will be directed by Will Gluck, who last gave us the abysmal Annie remake. Gluck is also co-writing the screenplay, doing so alongside Rob Leiber, who has no previous credits to his name. All of this is worrisome, at least to me.

Peter Rabbit will be entering production in January 2017, and is scheduled to be released in theaters early in 2018.