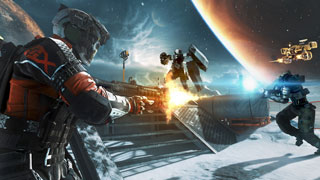 The Call of Duty: Infinite Warfare beta kicks off in mid-October, and it's a week longer for PS4 players.

Activision has announced the start and end dates for the Call of Duty: Infinite Warfare beta. Like the Black Ops III beta last year, you have to pre-order the game to get access. What's more, anyone who pre-orders on PS4 will get an extra weekend to play the beta.

The Call of Duty: Infinite Warfare beta will run over two weekends. For those who pre-ordered the PS4 version of the game, the first beta weekend will kick off on October 14 at 10 AM PT, and conclude on Oct. 17 at 10 AM PT. Both PS4 and Xbox One pre-orderfs will get into the second beta weekend, which runs from October 21 at 10 AM PT until October 24 at 10 AM PT on both platforms. If you're a PC gamer, you're out of luck. There is no planned beta on your platform.

There's no word yet on what the beta will contain, but it wouldn't be surprising to see it be very similar to the multiplayer build that was shown off at Call of Duty XP earlier this month.

If you have a beta key, you can redeem it on the official official Call of Duty website.

Call of Duty: Infinite Warfare is scheduled to launch for PC, PS4, and Xbox One on November 4.

Editor's note: An earlier version of this story erroneously stated that the beta would run a full week, rather than two weekends. We apologize for the error.