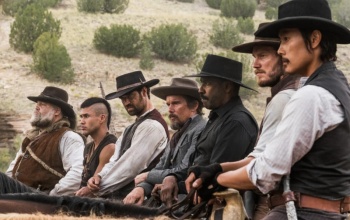 Cowboys and birds lead the way on a rebounding weekend at the box office.

Two big releases carried the weekend at the box office, although there were many huge dropoffs, either. Last week was disappointing, with only one movie making more than $10 million. This week, three films crossed that threshold, two of them being the week's new wide releases.

The Magnificent Seven opened to $34.7 million, giving it the second highest opening for a live-action Western since 1979 - Cowboys & Aliens debuted at $36.4 million in 2011. But unlike the Jon Favreau movie, The Magnificent Seven doesn't need to cover a $150 million budget. At a more modest $90 million, barring a huge second-week dropoff, the film should turn a profit.

Storks, the animated movie from Warner Bros., took in $22.2 million, which might be seen as a disappointment compared to other big-budget talking animal movies from this year. Finding Dory ($135 million), The Secret Life of Pets ($104.4 million), and Zootopia ($75 million) all easily cleared it, while even midcarders like Kung Fu Panda 3 ($41.3 million) and The Angry Birds Movie ($38.2 million) topped it. And while there isn't another animated movie aimed at children for another month, with the pending releases of family-friendly affairs like Miss Peregrine's Home for Peculiar Children, Queen of Katwe, and Middle School: The Worst Years of My Life, it might have a tough time recouping its budget.