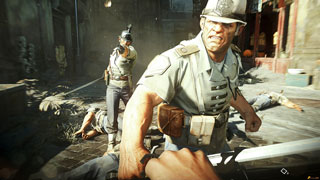 The newest trailer features Emily making her way through the Clockwork Mansion to kill the Grand Inventor.

Bethesda announced today that anyone who pre-orders Dishonored 2 will be able to start playing the game one day early. Alongside that news comes a new gameplay trailer as well.

While we've seen a short bit of the footage from this trailer before, there's plenty of new stuff here. It features Emily Kaldwin heading into the Clockwork Mansion to assassinate Kirin Jindosh, the so-called "Grand Inventor" who created the clockwork robots that we've seen in previous trailers.

As you can see, Emily's supernatural abilities are on display, along with her weapons and gadgets. Of course, you can always opt for the Flesh and Steel mode, which lets you play the game as Emily without any supernatural powers.

Dishonored 2 releases November 11 on PC, PS4, and Xbox One.