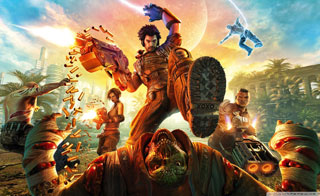 The Bulletstorm remaster that was teased at E3 looks to be real.

At E3 in June, Microsoft handed out USB drives full of game assets, and in those drives, some people found shots from a Bulletstorm remaster. Although it wasn't mentioned at the show, it seemed like a good sign that we'd see the raucous shooter remastered soon. Now, it looks like it could be coming out next year.

The Brazil Advisory Rating Board has a listing (spotted by Gematsu) for Bulletstorm: Full Clip Edition. It's shown as coming out for PC, PS4, and Xbox One in 2017. Interestingly, the remaster lists Gearbox as its publisher, rather than Microsoft.

We'll have to wait for an official announcement to be sure, but it's looking more and more likely that we'll get to see Bulletstorm again in the not-too-distant future.